Despite a late start yesterday morning, I was able to get Ugly Blocks completed prior to lunch. It'll be a nice quilt for a vehicle I would say.

Moving along. The firemen's quilt was loaded and prior to getting it out to measure, I had not a clue what I was even working with.

This is a pretty easy pattern and quilting ideas spilleth over! However, I know the guys who receive this won't give two toots about how it's finished so I decided to work on some of my straight line free motion stitching. You can see from the nearest blue block where I started.

But, since the blocks are so square, I incorporated some swirls into the mix to soften the quilting effects.

I only completed about half of this yesterday. It's taking me longer then I had originally thought, but that's because I'm taking my time and enjoying the learning process.

Today I'll continue with the quilting until completion (probably). I have to have it back by Thursdays guild meeting and I don't want to tempt fate. My stitch counter on DW is at 12.5 Million and Mike never came out to do the PM on him, so I'm playing with fire.

I'm not sure what happened with Mike not coming out, but I think Jim has something up his sleeve because he's being very evasive about why the man never showed up. Jim's sneaky like that. 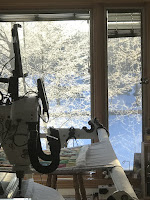